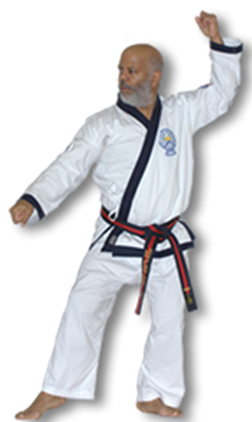 Master Smith began his Soo Bahk Do training in February 1990 in Royal Oak, Michigan under Master Wilton Bennett. Exactly one year later he moved to Vancouver, WA and had the good fortune of being able to immediately continue his training with Master Robert M. Shipley III who had opened his Camas Karate studio only a few months earlier. Mr. Smith was not through moving after his first arrival to Vancouver. Again, he was fortunate to find a Federation studio in Seattle from 1993 to 1995 and trained with Kyo Sa Jason Coleman.  He trains and teaches at both Camas Soo Bahk Do & Oregon Moo Duk Kwan (Lake Oswego, OR).

In January 2015 Master Smith shared his passion and dedication for Soo Bahk Do by branching out to launch Portland Soo Bahk Do at the former Portland Trail Blazers Boys and Girls Club.  In June 2021, he moved his program to the former NE Community Center Annex in Portland.

During his “free” time Master Smith enjoys spending time with his wife – Sheila – and playing with his children – Robbie, Sarah & Raymond, volunteering at his church, listening to jazz and blues, and writing songs about vegetables (and other moving topics).